Today I’m going to talk about breastfeeding. So if you’re breast-averse, now would probably be a good time to look away.

I’m a pretty big fan of breastfeeding. Which is no bad thing, because I’ve been doing it for over 6 years. In that time, it has gone from something I pay attention and obsess about, to something I can do without even thinking. Yes, you read that right. I have been sitting talking to other people, looked down and exclaimed, “How did that get there?!”

Here’s a few things I love about breastfeeding. I’m not going to go into the health benefits, because if you’ve ever been in a procreation situation, you know them all already.

1. I have a bona-fide, reasonable excuse to sit on my arse for large portions of the day.

2. It’s a miracle cure for tiredness, illness and over-stimulation in a small child. Oh, and hunger.

Babies love it too. But I have a sneaky suspicion that they have an ulterior motive for this. 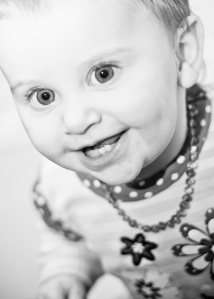 Overall, they’re pretty helpless. All they can do is squawk, gurn and move their scrawny little arms ineffectually. They don’t exactly have a lot of tools at their disposal.

But the one thing that they spend a massive amount of their day doing is eating. In their first few weeks, babies can feed more than hourly. It makes sense that they would catch on quickly to the idea that they can use this to their advantage.

Squeak could tell you all about this. Well, if she could say more than, “Daddy! Mummy! Ball! Poo! I see you!” It’s cool though. Using my impressive psychic mind-powers, I have become aware of her tricks. Here are a few examples for your perusal.

I’m confident that any baby can do this, regardless of feeding method. But breastfeeding’s what I know, so I’m going to go with that.

When I had Big Girl, life was a lot easier than it is now. I wasn’t aware of that then. When she was hungry, I would simply sit down and feed her. If we were due to be somewhere, I’d just be a little late.

Not any more. Now, I have a schedule. And that schedule largely revolves around something I like to call ‘the bastard school run.’ When Squeak was born, I had only Big Girl in school. We had to leave the house at 8.25am. Surprisingly, this wasn’t much of a problem. Tiny baby Squeak wasn’t a big morning feeder, so she’d be happy to be tucked into a sling and snooze while I raced Big Girl up to school.

No, it was the afternoon pick-up that became the problem.

I hate being late for anything. So I would start the ‘get ready to leave the house’ routine with plenty of time to spare for rogue tantrums, sock malfunctions, emergency toilet trips and baby feedings. Or so I thought.

Because Squeak had other ideas. I would get Little Girl ready and sit down to feed the baby. She had ages to have a huge feed, so she would sleep peacefully until we got home.

She would be completely comatose.

I would tickle, prod and blow on her. I would change her nappy. I would lie her down, a thing which at any other would have her howling. 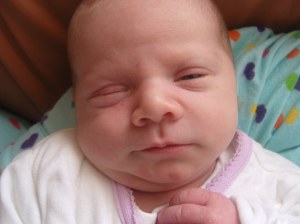 I would get us all into our coats and tie Squeak into the sling. And almost every day, as we left the house with seconds to spare, the exact same thing would happen.

Squeak would wake up in a wide-eyed, eardrum-bursting state of total starvation.

This is something which has become worse with each child. As very small babies, nothing could tear them away from a good feed. A bomb could go off in the street outside and they’d still be chowing down.

Then, they became aware.

Anything could distract them. A car starting up outside. The kettle boiling. A fairy flapping its wings or some imperceptible shit like that.

Their eyebrows raised and… pop! Off they came to have a good look around. (And it really is a pop. When babies breastfeed, they create a vacuum inside their mouths. And they are rarely considerate enough to break said vacuum in anything approaching comfort.)

Get the wrong impression at your peril, though. They’re not done. They’re just taking a break.

This one is a consequence of #2. A dire consequence. You see, if a baby gets too distracted during the day, they just start skipping feeds. Squeak was an awful one for this.

You’ve heard me describe my house as chaotic before, yes? It’s come up just occasionally, right? Oh yes. So chaotic, in fact, that Squeak couldn’t hack it. She went from a frequent feeder during the day to only feeding 3 times at 4 months old. And if I worried (I did) and tried to add in some extra feeds, she would fight me, screech and bob on and off until I admitted defeat. There was absolutely nothing I could do to stop it. All she wanted was to watch her sisters.

Thankfully, babies are clever, you know. If they carried on skipping feeds all over the place, they’d soon see some negative effects, such as weightloss. And babies are hard-wired to grow until they look like they’re wearing elastic bands on their wrists and their thighs have been inflated with a bike pump.

You see, babies have the rather irksome habit of seeing every day as a 24 hour period. Not the 12 hour one which I know I’d prefer. What Squeak missed out on during the day, she more than made up for at night. She fed and fed and fed until I thought her stomach would burst! The lack of day feeds became rather irrelevant, because she had simply flipped her days and nights round. Hence the term: reverse cycling.

The moral of this story is: Never say your baby is a good sleeper if they’re less than 4 months old. You never know what’s around the corner!

There comes a time in every baby’s life when she is not ready to go to sleep at bedtime. It might be because she’s ready to drop a nap, or because she’s working on a super cool developmental thing like walking.

Whatever the reason, she is not going to sleep, not matter what you do.

Squeak usually feeds to sleep. When it works, it is great. A nice, easy, peaceful time together. When it doesn’t work, this is how it goes:

I offer a feed. She accepts.

She attempts to detach my lower lip from my face.

She pokes me in the eye.

She pinches the tenderest part of my arm.

And so on. She finally gives in and I retire, licking my wounds.

When you first start breastfeeding, positioning is everything. It’s the difference between a comfortable, successful feed and a fail. There’s a learning curve which you have to go through to master it but once you have it, breastfeeding is smooth sailing.

At a point further down the line, your baby starts becoming more physically coordinated. They in turn master their own skills. They learn to roll over, crawl, walk, jump, and much much more.

Ever seen a baby try to roll over whilst still feeding? I have.

Ever seen a baby scratch his own head with his toes? I have.

Ever seen a baby feed standing up? I have.

The last one is Squeak’s personal favourite. After a few minutes of feeding, she lifts one leg and sliiiides off my lap. She stands in front of me, beautiful big eyes staring up at me, intermittently grinning. Gorgeous!

You know something’s coming next, right?

After a while, she gets a little bored of just standing. I mean, any old baby can stand up. So she steps it up a gear. She bounces.

And I have only one thing to say to that. 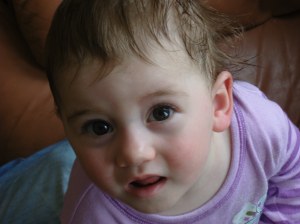 Seriously though, despite the tongue-in-cheek points that I make further up, I have to say that breastfeeding is full of awesome. Once you get the hang of it, it is a wonderful, close time you can share with your baby. And once they’re bigger and mobile, and too busy for cuddles, it’s a guaranteed thing they will come back for.