It is my guess that most people can tell, on entering a house, whether it contains children or not. A childful house has a certain air about it, don’t you think? 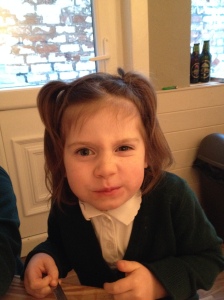 Or, at least, a certain scent.

For me, there are definite signs and symptoms that my house is inhabited by small, messy bandits. I have listed a few below, but maybe you have some others to add?

1. There is always something underfoot

Now, I must begin by affirming that I in no way fit the definition of a ‘neat freak.’ Which is no bad thing, because the kids would certainly not be in support of it. I rather like a fairly tidy house. I enjoy sitting down in the evening with the toys cleared away and the room free of clutter.

The children, I assume, prefer a greatly different household landscape. They like socks, used as missiles and then discarded where they land. They like to dig deep in the fancy dress bin for their most desired costume, leaving a cascade of brightly coloured fabrics strewn across the room.

I can say with some confidence that it is extremely difficult to keep your footing when you step on two layers of synthetic fabric. To clarify: Whooooosh!

And so, walking through my living room has become an obstacle course of small objects (and some larger, although I’ll get to that in a moment.) The punishment for diverting incorrectly through said obstacle course being, of course intense foot pain or a generous helping of guilt.

It’s amazing, really, how many things can become part of this. Sometimes it’s boring and predictable. I’ve stepped on Lego more times than I can remember. But everyone’s done that, right? That’s just a rite of passage into parenthood. Then there are the brittle, cheap toys that crumple and snap into vicious plastic shards the moment you rest a toe on them. Naturally you just destroyed your child’s most precious thing at that point, despite them having played with it once or twice in a year.

Of course, there are always the weirdly sharp crumbs of food, and those things that can only be described as ‘unrecognisable, but definitely squelchy.’

As for the larger object… Well, try and tell me you haven’t either trodden on or fallen over an angry toddler at least once in your parenting lifetimes. They have an immense skill for placing themselves in the most inconvenient of spots, with their favourite tactic being to collapse directly in front of you, just as you are about to take your next step.

I’m sure the intense grimace I am wearing when this happens, as I weave and flail for a footing that doesn’t involve my crushing my little one, wouldn’t be out of place in a sitcom (with appropriate canned laughter, of course.) 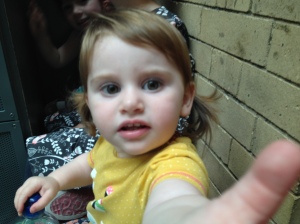 2. There are at least four lights on at any one time

What is it with children and their inability to retain a simple instruction for more than ten seconds? I swear I need to record myself saying my most used phrases, just to save my breath for better things. This recording would include:

“Please pick that up.”

“Get off your sister!”

“Please don’t put that in your mouth.”

“Turn the light off!”

I know I was just as bad as a kid. I am still confused, though, as to why children are so incapable of remembering to flick a switch when they leave a room. I can let Little Girl and Squeak off for now, as they are too small to reach the switches (without climbing assistance, anyway. And I prefer not to encourage that, for obvious reasons!) 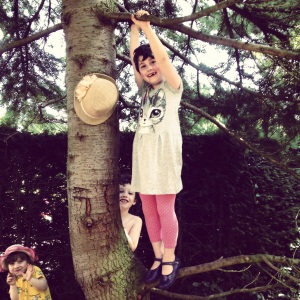 Big Girl, though. Every night she nips to the toilet before bed, while I wait in her bedroom to say goodnight. And every night, without fail, my question of, “Did you turn the light off?” leaves her scurrying back to the bathroom with a sigh. You’d think after months of the same old routine it would have become a habit by now.

And if she’s run up to her bedroom after school to grab something, I can guarantee that the light will be shining brightly when I next go up. Which makes no sense to me, because it’s not even dark then!

I’m hoping it’ll sink in one day. Although I am doubtful.

3. Your washing basket is full of single socks

Aside from the aforementioned missile usage I described above, I’d say the role of the sock is a fairly basic one. You put them on, wear them all day, take them off and put them in the wash. There’s not really much wiggle room going on there.

If that is the case though, how come I am constantly faced with a washing pile overflowing with unmatched socks? It baffles me. I have at least twenty lonely single socks, living out their miserable existence far away from their intended companions. I hunt through the house, certain I will locate them. Because really, how far can socks go?

Well, you can guess how successful I am in this task. The fact that I include this section at all shows that I have had no sock related victories.

With this in mind, I can conclude only one thing.

The children must be eating them.

4. The fruit bowl looks like a feral monkey got in through the window

If there’s one thing I have become fearful of since having children, it’s the sound of silence. Many a time I have been absorbed in some sort of menial task, only to jump up with a start when I realise I haven’t heard a peep from Squeak in half a minute or so.

That’s a lifetime in Squeak hours. That kid can destroy shit faster than a monkey can defecate and launch it in your face.

Sometimes she’s busy spreading the contents of my handbag across the floor. Others she’s engaged in a focused book shredding activity (always one of my favourites <sigh>) or massaging herself with a generous dollop of my moisturiser.

Last week I experienced another one of these silence-related panics. Squeak had quietly slid away to the kitchen, and was doing God knows what in there. I sped in to discover this:

Next to it stood a triumphant little girl, stuffing her face with another banana. I mean, it’s just rude to peel three bananas and only eat one!

I got off lightly compared to normal, though. Usually there’d also be at least four apples with one bite taken out of each. Because apparently it takes that many tries to recall that you actually don’t like the texture of apple skin.

5. You have to clear 63 half-finished masterpieces off the table before you can serve dinner

Creative children are wonderful. I love the detailed stories they relate to me, and the songs. Yes, really. Despite the fact that during each song I can hear at least seventeen of my brain cells slowly dying, I appreciate the effort they have put into them. It’s not the musical talent I take issue with, but more the fact that every line is preceded by a long “ummmmmmmm,” because they have no idea what they are going to sing about.

Anyway, by far the most prolific creative pursuit in our house is drawing. Detailed sketches, comic strips and ominous circular scribbles can be found everywhere, and I spend half of my life reuniting pen with lid.

The only problem is, the children so rarely finish any of their pictures. Like little butterflies they flit from task to task, abandoning the one that came before. And they have come up with a devious method to prevent me from questioning their numerous discards. 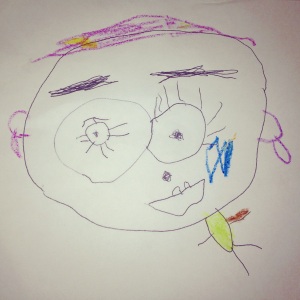 I mean, when faced with a winning smile and a cute voice saying, “This is for you!” could you really respond with, “Thank you, but did you know your girl is missing an arm? And a face?”

Therefore I am constantly faced with a table festooned with reams of partially scribbled-on paper. And God forbid I would actually dispose of any of it.

Because you know they’d suddenly express great desire for it as soon as it hit the bin.

6. At least once a week you wake to your eyelid being prised open and a chorus of “Do you wanna build a snowmeeeeeeean?”

For me, this is new. Although the obsession with Frozen definitely isn’t! Squeak and Mila spend whole hours debating who will be Elsa and Anna, and acting out all of the songs from the film.

It’s quite cute, I have to admit.

But when I was dragged from sleep the other morning by a hooked forefinger sliding across my cornea and a shrill voice proclaiming the above phrase, I had to say it was a step too far.

Not that it’s put Squeak off or anything. If anything, a suggestion of pain on my part should be a great encouragement for her.

It’s in keeping with her current personality traits, anyway!