Happy Valentine’s Day! The day to show people how much you love them. And kids are so wonderfully open to displaying their love for us. It’s quite beautiful, really.

Obviously that’s what I’m planning to talk about today. My kids have found some slightly unconventional ways to show me just how much I mean to them. I appreciate it, really I do! Some of the time.

Sharing is a great skill to learn. It’s hard though. Apparently kids don’t have the ability to learn to share properly until 3 or so. Which matches up pretty well with the hell I’m experiencing at the moment with 2 year old Squeak!

Still, there are times when even a smaller child can enjoy the experience of sharing with someone. Like their mother.

I’m sure most people who have procreated have had this happen to them. You’re sitting with your little person as they start learning how to feed themselves. You’re doing that whole enthusiastic smiley thing so that they don’t freak out about the fact that they just gagged so hard the food flew straight over the highchair tray and onto the floor. 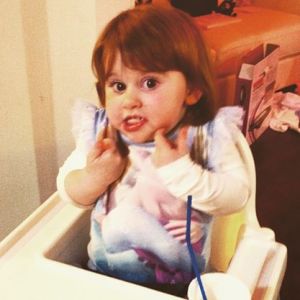 I’ve never stopped being impressed by that.

Just then, they pull a presumably tasty morsel out of their mouth and offer it to you. There it sits in between their thumb and forefinger, all partially masticated and moist.

They squawk at you indignantly as you try and avoid having to touch it, waving it in front of your nose. Take it, take it, TAKE IT!

In the end, you have to pluck it gingerly from them and pretend to eat it. Mmmmmm!

They’re never fooled by that.

It carries on as they get older, when things may be less moist but surely still extremely bacteria-laden.

Tell me, what is the nice way of saying, “Thanks, but I don’t know where your hands have been.”” 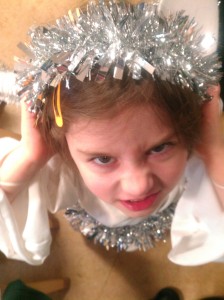 2. Getting Dressed By Themselves

It’s no mean feat, learning to put your clothes on by yourself. The armholes look like leg holes, the head hole is constantly disappearing and don’t even get me started on buttons.

I know what I’m talking about. I got stuck in a jumper the other day.

What? Yeah, sure. I was kidding!

That being said, dressing small people is a total ballache. By the time you’ve got one arm in they’ve wriggled the other one out, and your crotch is in just the right position for a well-aimed kick that really stings. And don’t even think about socks. Someone definitely needs to redesign those things.

So it’s great once they can do it themselves. You can just lay everything out and then sit back and grab a cuppa, jumping up to assist with head hole location as and when required.

The problem is, then they start getting picky about what they’re wearing. They want to take the whole ‘doing it themselves’ thing to the next level.

That’s when you end up leaving the house with something that looks a little bit like this:

And you don’t even care. Because at least you didn’t have to fucking do it.

First smiles are just the bestest thing ever. They come, conveniently, at the point when you’d happily put your kid in a basket on a doorstep, ring the bell and run away.

And they’re so addictive. As soon as you’ve seen that first little grin, it’s hard to do anything other than try and get it to happen again. And again. And again. You’ll quite happily make a total arse of yourself at any opportunity, just to see those initial signs that your child sees you as a little more than a demonic food-providing overlord. Singing? Check. Dancing? Yup. Embarrassing facial contortions?

One thing to remember, though: it’s a risky game. Because babies love nothing more than to guzzle down just enough of an excess of milk that they have a little extra kept back. Preferably to deposit on you at the most moment-spoiling of times.

So when you’re locking eyes with your little gurgling bundle of joy, talking in that high-pitched stupid voice that apparently is sooo good for their development, do me a favour. Have a muslin handy. Because awwww-BLEURGH!

You can thank me later.

As much as I love the tiny vomiting goblins that are newborns, there’s something amazing about watching your children grow up. Little Girl has just learned to read and write, and she just can’t stop herself from doing anything else.

Unless she’s making gravity-defying Lego structures that inevitably fall down to shrieks of futile rage, that is.

Now in some ways, learning to read is not so great. As mentioned in a long ago post somewhere, I seem to spend half of my time ushering Little Girl away from various pieces of graffiti on the way to school. Not to forget hiding my screen from her as I type. 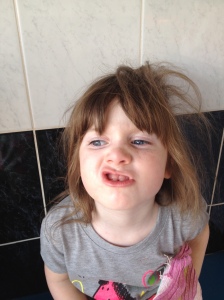 How lucky that the word ‘fuck’ is so easy to read for an almost 5 year old. Yay!

But it’s really cute watching her lean intently over a page, sounding out words and triumphantly shouting them when she’s figured them out. A whole new world has opened up for her.

And a new part of that world is the writing of love notes. More specifically, very very small love notes that must, of course, be snipped ever so carefully with her new bumblebee scissors.

Now last night I wasn’t lucky enough to get words. Instead I received three pinky-red blobs that of course were hearts for God’s sake, and I apparently did not show enough appreciation for.

Evidently, though, sometimes I do deserve something a little more effusive. Like this, for example: 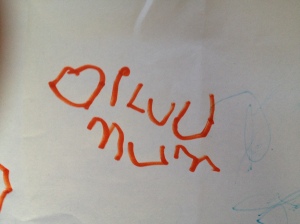 D’awwww! This was one of the first things Little Girl ever wrote for me, and I have treasured it so much that it took me ten minutes to find it on my computer.

But how cute! It definitely makes up for the 3am nosebleeds, the vomiting, the nightmares… It does!

And so what if you occasionally get something like this:

This is the advanced version of the Grin-Vom. You’ve got to have developed a fairly strong streak of mischief to properly appreciate it.

We’re a fairly kissy family. I don’t spend a lot of time without at least one small body snuggled up against me, chubby face upturned and lips puckered. I love it!

Sometimes, they use this against me.

If I had to pick the person who uses this most, I’d have to say Squeak. She is one sneaky little monster. And she’s well versed in the arts of delayed gratification. She’ll kiss me tens of times before she swoops, just to lull me into a false sense of security.

And then, SLUUUURRRP! A big, soggy lick right up the side of my face.

But she’s not doing it maliciously! Oh no, of course she isn’t. She’s a cat. 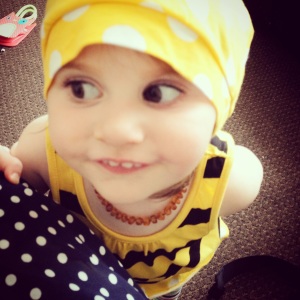 Anyone who has an older girl may get what I’m talking about. Sometimes the only, and I mean the absolute only way to show your mum that you love her is to act out an elaborate play.

You know, the kind that has seventeen characters who have no names or distinguishing features, all played by the same person. Yes Big Girl, I’m looking at you.

The kind of play that lasts at least three hours, at least two of which are spent making mistakes and giving unnecessarily long explanations of what’s going to happen next. And farting.

And if you’re really super lucky, you might get lines. Which are inevitably written in a barely legible scrawl on a minute piece of paper, chopped by (yes, you guessed it!) the beloved bumblebee scissors.

Be careful not to make a mistake, mind. Despite those two hours of errors and nonsensical plot changes, all hell with rain down on you if you fuck your bit up.

Get your rictus grins at the ready! Oh, and don’t forget to applaud extremely hard at the end. Otherwise she might start all over again.

Just a regular cynical post from me, as usual! But fret not. I’m not completely dead inside.

Because when they’re taking a break from strangling and hissing at each other, there’s a bit of this:

And a touch of this: 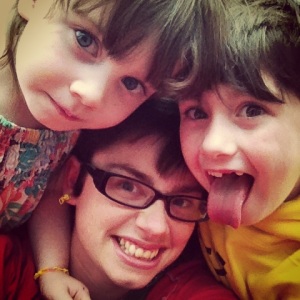