Mark is a keen gamer, and I’m a bit of a dabbler myself. In watching and playing a lot of games, I have come to the conclusion that my kids bear more than a passing resemblance to videogame bad guys.

Skeptical? That’s ok. Just read on and see what you think.

I think we can all agree that bad guys do not tend to have gentle, happy faces. Think of the Joker. Or Bowser.

I mean, they’re bad guys. They’re supposed to be pissed off and mad at the world. Otherwise, they couldn’t justify raining shit down on anyone who tries to cross them, right? (I may be overthinking here.)

My kids are not bad guys. I am definitely not saying that. Most of the time, they are happy-go-lucky and great to be around.They do as they are told and play nicely together.

But they are sometimes like bad guys. For example, this is the look you get if Big Girl is less than impressed with you:

Just look at those eyes. Do you want to mess with that? I don’t.

And it’s not just her. Little Girl and Squeak also have mad skillz at shooting their displeasure with me straight out of their eyes.

I suppose I should be glad that they’re not lasers, at least.

Thank God they love me (most of the time.)

It has been said that my kids have disproportionately large hands and feet.

No, it really has been said. A friend described Big Girl as having “hands like a rugby player’s,” when he first met her. When she was three weeks old.

I like to think of them as being similar to St. Bernard puppies. You know, with the enormous feet that they eventually grow into? Maybe it’s a sign that the kids will end up being taller than me.

Or maybe they’ll be more like Ralph, from Wreck It Ralph. You know, whatever.

He was the bad guy I was thinking of when I started writing this section. Yeah, he doesn’t really want to be bad, and he does turn good in the end (so not a spoiler. It’s a Disney film for God’s sake, they all turn good in the end! Or die.) But the fact is, he is a bad guy.

I’m not sure what the purpose of the kids’ big hands and feet will be in the end. I’m just hoping they’re not for crushing, or smashing, or slowly suffocating me with a pillow.

Most videogame bad guys dress a little quirkily, it must be said. Maybe it’s so that they stand out from all the other characters wearing normal clothes.

Or maybe they’re just ahead of their times, with regards to style.

Whatever it is, my kids have got bucketfuls of style. It’s just not what most people would conventionally wear.

Here’s one of Big Girl’s creations as a toddler: 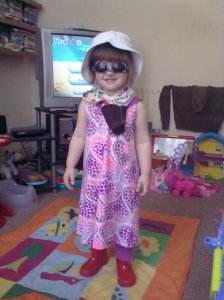 The other day, I suggested to the girls that they go upstairs and pick their own clothes to wear. I don’t normally do this, because I just don’t have the time for endless debates on the merits of wearing your knickers backwards, or shorts in December.

But I guess I was feeling tolerant that day.

Can you guess what Big Girl’s response was to this suggestion?

Her eyes lit up, and she said enthusiastically, “I’m going to wear sooo many t-shirts!”

Every supervillain needs a catchphrase. For example, this from Mortal Kombat:

My kids have got them too. And they use them over and over again. Because repetition is the name of the game.

Big Girl’s favourite phrase is, “You’re so mean!!!” Preferably screeched at the top of her lungs and followed up with her stomping out of the room.

Who knows, maybe I am so mean. Is it wrong to stop a kid from handcuffing her one year old sister to a toy kitchen? Is it?

On reflection, maybe not.

Little Girl’s isn’t so much an expression of rage as an explanation of… well, pretty much anything she’s doing at the time.

So if I say to her, “Little Girl, why are you naked and colouring yourself in blue?” she has a pre-prepared response all ready for me.

She will reply, “Because I need to.”

And that is all.

They Pop Up At Inconvenient Times

I don’t know how many of you play, or have played, video games. The one guarantee as far as I can see is that if you are low on life, ready to save and go to bed, or about to do a really exciting mission, that is when the bad guy will appear and attempt to obliterate you.

If you haven’t played any games, just take my word for it.

I’ve said before that I think kids have in-built radars, to sense when you really need to do something. In an ideal world, they would respond to this by occupying themselves with a game or toy, or doing as they were told. Or, you know, freaking sleeping.

But this is not an ideal world.

When I sit down and press the Play button to watch a movie, you can be assured that one of two things will happen. Either Squeak will wake up for a feed, or Big Girl will come downstairs for a drink of water, or to have an unnecessary conversation about flies.

So, how hard do you think it is to kiss a fly?

I say this with complete confidence.

Don’t even ask me how hard it is to go to the toilet in peace.

Everyone knows the unexpected way a child’s mood can not just swing, but bounce around crazily from one moment to the next. Just like a deranged bad guy, amirite?

I’m sure that the reason for this is because they are immature, and learning to deal with complex and new emotions.

But I think they’ve got an ulterior motive.

That is, they are desperately trying to keep you on your toes. If you don’t know what to expect from one minute to the next, then they’ve always got the opportunity to get one over on you.

Stop me if you disagree.

Big Girl is the baddest bad guy in the house for fluctuating emotions. She’ll run to you sobbing because she’s stubbed her toe, only to burst into hysterical laughter as you hug her. What’s the deal with that?

And I can never predict the moment that she will flip because she doesn’t understand a joke, or because she’s just plain old overwhelmed with life.

Always on my toes.

They Are Ultimately Defeatable

There are times when a bit of a chat, a cuddle and an apology from either me or them can stop a strop in its tracks. I like these times. A lot.

But some kid issues are just plain unwinnable. If they’re overtired, or in one of those moods, you’ve got no chance of fixing it.

Well, almost no chance. Because there’s one thing which kids can’t avoid, however cross or frustrated they are.

They have to sleep. 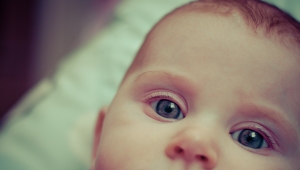 And sometimes it’s the best thing for them. Many a time I’ve been relieved to tuck them in and collapse on the couch after a completely spectacular meltdown. It’s like hitting the reset button on a game and starting all over again.

What if we were like dolphins? Now, because I’m so freaking dedicated to bringing you the facts, I Googled dolphin’s sleeping habits. Apparently, they only allow one half of the brain sleep at a time, so they can remember to go up to the surface to breathe.

If kids were like this, you just know they’d store the arguing area in the awake side.