It is said that parenthood is a bit of an emotional rollercoaster. It is full of highs and lows, victories and epic failures. 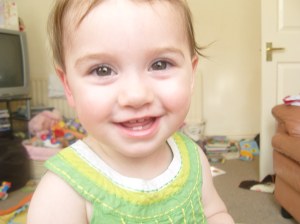 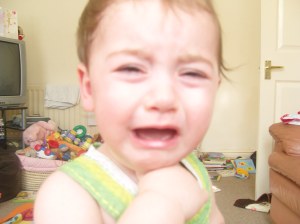 If anyone knows that, it’s me.

All perfectly justifiable, in my opinion.

Not any more. Now, it feels like I cry just because my eyes are a bit dehydrated.

I actually find it annoying a lot of the time. It is quite embarrassing to start whinging your head off at the drop of a hat. Especially in public. My voice cracks, my throat aches, and if I’m mid-sentence I have to break off while I get my shit together.

I wouldn’t mind, but most of the time I’m crying for no good reason. Or if there is a reason, then I’d be able to deal with it a lot better if I wasn’t blinking three times a second to try and clear the blurry film of tears from my eyes.

1.The book ‘Dogger’ – Have you ever read this book? It was one of my sister’s favourites as a child, and I have many happy memories of listening to my dad reading it to us. So of course, I was delighted when it was passed on to me. I looked forward to sharing it with my own children.

Sorry, what did you say? How many times have I read it to them?

Once. And it was a fucking travesty.

I don’t think I got through even one page before the tears started. It’s just so freaking sad. The little boy lose his stuffed dog, his most beloved toy. He sobs and sobs. Then he finds it again, then it’s gone again and oh God I just can’t cope!

Bravely, I soldiered on. My voice wavered and at times went all high and squeaky. Big Girl started to suspect something was up when I had to keep pausing to wipe my eyes and clear my throat. At first, she only threw me a few judgemental looks. But as I snivelled my way through this seemingly endless book, she soon started to laugh at me. 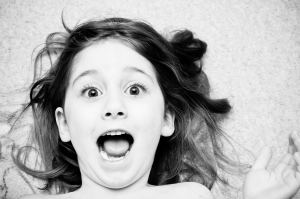 I did make it to the end. By that point my throat had nearly closed over.

Soon after, I hid it. So well that even I can’t remember where it is.

And I am never going to read it again.

2. Slow Motion Video With Inspirational Music – This one is just ridiculous. In fact, I’m >< this close to taking it out. Because some of the people reading this actually know me in real life. I’m never going to be able to look them in the eye again.

Ah, sod it. I’m doing a public service here. The next time you do something hideously embarrassing and your face feels like it’s about to combust, remember me.

Anyway, allow me to elaborate. I’m going to pick X Factor to use as an example here, because that show does this more than any I’ve ever watched. I don’t even watch it anymore because I can’t take the emotional upheaval.

Right, you know when someone does an audition on X Factor. It happens the most when it’s someone who has triumphed over adversity, or is a child, or looks a bit different from the norm. Man, that show is so formulaic.

They’ve finished their audition and been voted through. The crowd stands and cheers, and they dash backstage to the loving arms of family and friends.

Suddenly, they start to move in sloooooow mooooootion. The music builds.

And that is all it takes.

Floods of tears. It’s not just X Factor, either. Every time those two elements meet up, I’m reaching for the tissues. Like an advert for Cillit Bang. Or Crufts.

3. Accidentally Hurting My Kids – I’m redeeming myself slightly with this one, because it actually makes sense.

Obviously I don’t go round deliberately injuring my kids. What do you think I am, some kind of animal? But sometimes, accidents happen. Especially when you’re rushing, which I almost always am. I’m changing Squeak’s nappy and I catch her skin with my nail. Or one of them sneaks up behind me, and I turn around and knock her flying. 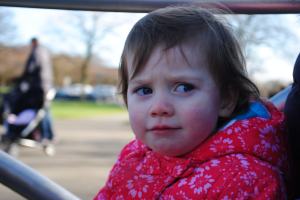 Actually, I’m not taking the blame for that one.

Of course, she sobs as if she’s broken every bone in her body. I feel awful. I wrap her up in my arms and cuddle the pain away. And yes, there may be a bit of eye stinging going on.

4. When I’m Tired – exhaustion comes with the territory of being a parent. Broken nights with baby, comforting a child who has had a nightmare, dragging myself out of bed to get them ready for school. And also the racing round all day to get everything done.

And when I’m tired, I do annoying things. Like drop something and pick it up again three times in a row. Or drop my toast on the kitchen floor. Butter-side down, naturally.

At any other time, this is nothing more than a minor irritation. I may sigh and swear under my breath but then I just get on with it.

But not when I’m tired.

Then, it is more like an utter disaster. Maybe there is a fictitious being who is deliberately doing these things to mess with me.

Excessive, mayhap. And I’ll admit that weeping as I remake the toast is a bit of an over reaction.

Cut me some slack. I haven’t slept for years!

5. Singing Children – This one I know is silly. But, as the season of Christmas plays and concerts approaches, it is at the forefront of my mind.

You would be mistaken for thinking that I did this because I am so proud of my kids. That would be fine, right? It isn’t, though.

I think it’s the sound that does it. Little, tuneless voices singing “Twinkle Twinkle” or “When Santa Got Stuck Up The Chimney.” It gets me every time. 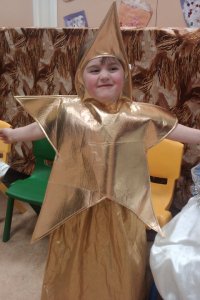 I forgot the tissues last year. Not making that mistake again. The tail of my sling was sodden by the end. And of course I was sitting near the quietest parents. Not the boisterous toddlers, or the chatty people.

Every sniff and choked sob felt like it echoed round the room. It didn’t. But it felt like it.

6. The song ‘Proud’ by Heather Small – I love this song. Heather Small is such an amazing singer, plus it reminds me of being a kid.

I like to play music while I eat with the children. They have a bit of a dance once they’ve finished, and as a bonus I get to start indoctrinating them to like my stuff. Heh heh.

I sing along between mouthfuls as well. But for some reason, every time ‘Proud’ gets to about halfway through, I choke. The actual song doesn’t make me feel sad, so I can’t understand it.

It totally ruins my jam as well.

7. The Kids Being Upset – This doesn’t happen all the time. Which is lucky, because with three kids at least one of them is crying at any one time. 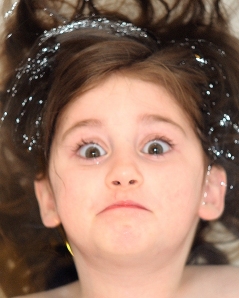 Despite appearances, this is her sad face. According to her, anyway.

It’s just the big stuff. When Big Girl is upset because someone has been really unkind at school, for example. Or when Squeak is crying for the 45th time in an hour.

That’s when I engage my secret crying reflex. I don’t want them to see me crying, because then they’ll be even more upset. So somehow I manage to cry completely silently, and with no shedding of tears.

8. Other People’s Kids Being Upset – This one is just daft. What you have to remember, when you’re thinking I’m a loon right now, is that I don’t choose to do this. It just happens!

You know when a little kid trips right in front of you? They skid along the pavement, scraping their palms and knees. A huge howl explodes forth, and the parent runs to scoop them up.

That’s the moment. The awful sound of their screams and the very unfairness of it all. One minute they’re wreathed in smiles, and the next they’re covered in blood.

9. When I’m Ill – The problem with having young kids in school is that they bring home every bug in the world. And as you snuggle them on the couch as they fight off another cold, or wipe their face with a cool cloth after they’ve been sick, they’re passing it straight on to you.

I don’t think I’ve actually been well since September. It’s been cold after cold after sore throat after cough. For three goddamn months.

I hate colds. They’re bad enough to make you feel like utter crap, but not bad enough for you to take to your bed. Your head is pounding and your joints are aching. Your nose is raw and all you want to do is sleep. But no, you have to keep on doing all the usual stuff. Maybe with a couple of ibuprofen if you’re feeling particularly fragile.

I just can’t hack it. I’ve always been that way. I can drag my way through with all manner of illnesses. I’m not one to swoon and do nothing. But at the same time, I can’t stop the weeping.

The trigger is when I’m standing, cooking dinner or cleaning up. I feel so weak that I’m surprised my legs don’t collapse underneath me. And it’s ages until bedtime.

Thankfully, there is a beneficial side effect to this. I laugh really easily as well. I can take great joy from funny things the children say. I love a beautiful view. And Larry David is truly hilarious.

But seriously, I’m running out of tissues here.

Just call me The Leaky Tap. 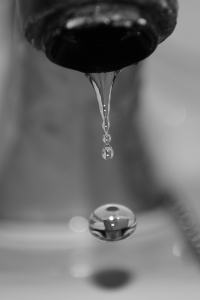 Ha! You have literally no idea how chuffed I was to find this picture.

4 thoughts on “The Leaky Tap”