Although I say it reluctantly, today Squeak is 1. It is unbelievable to think that, a year ago today, I was in labour with a stranger, of whom I knew nothing. And now a whole, complex person stands before me. Wow. 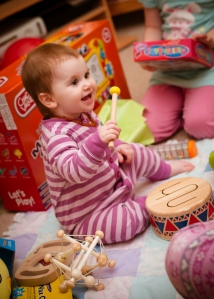 As an aside, she is totally not standing before me. She is using her newly acquired door-opening skills to get as far away from me as possible. Or at the least, up a couple of steps on the stairs before I catch her.

I planned the morning carefully. Every minute of our pre-school time is already filled with sock-finding, child-wrangling and book bag-locating, interspersed with a smattering of weeping (mine). Where were we going to fit in presents and an awesome breakfast?

It’s cool, I thought. I’ll just get up early.

WTF was I thinking? I deeply regretted this at 6.30 this morning after a typical Squeak-night. Yawn.

Breakfast was where I started being awesome. (N.B. If you make something with flour, you’re being awesome.) I took some inspiration from Crappy Mama, from Illustrated With Crappy Pictures. I read her post about buttcakes a few weeks ago, and I knew they’d be a hit with the girls. Toilet humour is a big part of our household.

A big part. Big Girl is a veteran of this craft, but Little Girl is a relative newbie. She has just discovered the joy of replacing all of the nouns in a song with the word ‘poo.’

So anyway, I made buttcakes. Nothing special, just a standard American pancake recipe. Oh, but I did add chocolate chips to really emphasise the whole butt thing. I 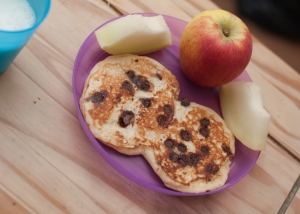 raced through, and managed to finish them just as the alarm went off for the girls to get up. I finished of course, with the obligatory ‘Oh shit I flipped too quick and now it’s folded in half! Hmm, maybe I can fix it. Nope, it’s stuck’ pancake. Or is that just me?

I know this isn’t just me. I was possibly slightly hasty in getting my ingredients together. I did not realise that descending my stairs leads you into some kind of time warp, but it does. Well it must do, anyway, because it took me 10 minutes to get downstairs! So I was running a bit behind. I grabbed the flour, baking powder, etc, etc. And I may have dislodged something, somewhat. That something was the icing sugar.

Have you ever dropped a packet of icing sugar? It causes an explosion on the scale of a nuclear bomb. I could taste it, I was breathing it. It went all over the floor, up the table leg, all over my clothes, on Big Girl’s bookbag…

And a particularly large cloud settled right on top of Mark’s jacket.

Despite the catalogue of fails, it was a success. According to the girls, they were delicious! They all agreed. Well, except for Squeak.

She threw hers on the floor.

Breakfast and presents were followed by a truly riveting morning of school runs, shopping and naps. Happy Birthday, Squeak!

She seems pretty happy this afternoon, though. Currently, she is running around with a new crayon, drawing on everything that isn’t paper. For variety, she’s also carrying her new wooden drumstick, and is using it to check if we are alive.

I guess the yelps of pain don’t give it away. I’m rubbing my knee right now. 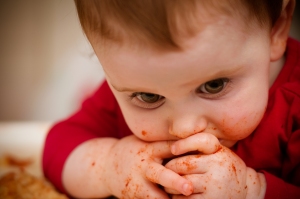 Homemade pizza for tea tonight. I’m sure it’s going to be a relaxing experience, seeing as I haven’t made the dough or sauce yet. Or chopped the toppings. Dammit. (You’ll be reading this in the evening, but I wrote it this afternoon. Therefore, I don’t know how wrong this will go yet. I’m scared.)

My mother in law has made a lovely cake for us to celebrate with. Squeak’s response when I showed it to her was to shriek, “Oh, wow!” We’re all looking forward to having a try. 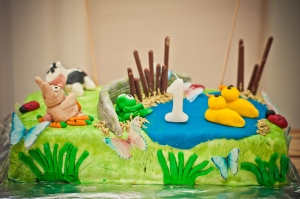 I’m feeling a little reflective today. Do you ever feel like there isn’t enough time to just sit and enjoy your kids? One year flies by and the person that they were is gone. It’s sad.

One good thing, I suppose, is that there is an even cooler person waiting in the wings for you to get to know.

All you have to do is close your eyes to the dirty dishes, the piles of washing and the crumby floor.

That could get messy. 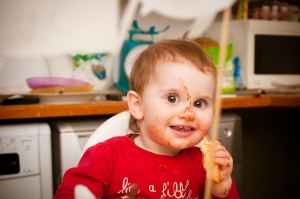 Total side step alert! As well as Squeak’s birthday, today is also my one month blogiversary. Wahoo!

If you don’t mind, I’d like to ask for a wee bit of feedback. So what do you like? What do you hate? Is there anything in particular you’d like to see me blogging about? Let me know in the comments!