The day is long. Oh yes, R.E.M. knew what they were talking about. Although ‘the night is yours alone’? Ha, I wish. 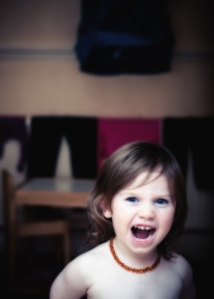 It can be pretty tedious as well. There’s only so many times you can sing ‘Row, Row, Row Your Boat’ before you just want to remove your own voice box. Nappies, homework, highchair-wiping, whingy child-wrangling… A lot of it is mundane and repetitive.

Now don’t get me wrong. I love spending time with my kids. They are awesome and cute and frequently hilarious. But the other stuff is not so fun. Sometimes, I just need something to get me through to bedtime.

Historically, there have been many different ‘mothers’ little helpers.’ But getting hooked on alcohol or drugs is not really my bag. It’s cool though, I’m creative. Let me share with you my ways for surviving a day with small, irrational human beings.

Ok, number one. Go and stand in front of a mirror. Place one hand on each cheek and press in and forwards. Haha, you look like a fish! But don’t be silly. I don’t spend all day make fish-faces at myself in the mirror. No, this is far more satisfying when applied to a small child’s round hamster cheeks. Especially if they have just got their front teeth, and they look all enormous and gappy. Try it. I’m telling you, it’s a winner.

I hear you, it sounds too simple. And it’s not unique. Everyone fish-faces their children, right? I know. I don’t care, though. It’s funny! I’m not sure the children exactly love it, based on their frowns and attempts to push my hands away. But after all the sacrifices I make for them, surely they could just tolerate it a couple of times a day?

Next up is a bit of a literary one. My favourite children’s author is Dr. Seuss. I have loved every single one of his books I have read. I love the rhythm of the rhymes, you can really get swept up in it! Like, really swept up in it. So swept up that you can only speak to your children in Cat In The Hat language.

It’s not all bad though. It’s actually pretty fun. And it provides a welcome diversion when performing menial tasks. Such as:

Your knickers don’t go on your head,

The Grand Rajah of Chuff-Gluff said,

They go upon your butt, he said.

Don’t throw your vest onto the floor,

Or hang your skirt upon the door,

You’ll be late for school, I’m sure.

Don’t wriggle while I brush your hair,

Hey! Get out from under there!

Why are you still in your underwear?

Well, Squeak’s impressed. Go on, give it a go!

This last one only works if you have a really repetitive toddler/child. Luckily, here’s one I made earlier. It’s Little Girl! Little Girl loves to say things over, and over, and over again. And predominantly, it is the most annoying thing in the world. But it is also totally freaking cute!

I always say, there’s no point in pro-creating if you’re not going to use the resultant children to your advantage at least some of the time. (Actually, I don’t think I’ve ever said that but you have to admit, I make an excellent point!)

So when I’m feeling down, or stressed, I just call Little Girl over. And ten minutes later, after I’ve said her name at least fifty times, she comes. And we have an exchange that goes a little like this:

‘De animals, de animals, crap crap crap, cage is full. Cage is full, standawait, in de dark, count de steaks.’ (LG’s favourite song, the theme tune from Orange Is The New Black http://www.youtube.com/watch?v=w9_isl1jjHc. Which she obviously doesn’t watch. What do you think I am?!)

‘Hey LG, what was that song you were singing about forks at the weekend?’

‘Forking! Forking my head! Forking in my head!’ (Yes, that happened. At the dinner table at my mother-in-law’s. Mortifying. Yet amusing!)

You see? Just a few minutes of that, and I’m already feeling a little better. If it goes down that way, anyway. It is massively more likely that her response to any request will be, ‘No!’ It’s worth a try though.

So go ahead, give it a try. And you might just find that you reach the fabled ‘bedtime hour’ with a modicum of your shredded nerves intact. And if not, well at least you managed to pass enough time to justify ignoring the washing pile again.

Tell me, how do you get through the day?